Scratch, Inconsistent behavior of how data are sent to remote sensor protocol

Related to the scratch optimizations performed by Tim Rowledge the last weeks,  I have investigated my scratchClient and removed some bottlenecks. In some cases, it used more CPU as scratch itself. Now, the ping-pong-performance test runs in 50ms for one cycle.

When you do things like this, the next question is whether all values are handled correctly. This is the starting point for the following experiments.

You do not need a sophisticated test software to execute the experimennts. A simple “telnet localhost 42001” just displays what is going on, at least the send-to-the-outside part of the story. You need to enable the remote server inside scratch first. Do this by /sensing / rightclick on ‘slider’ sensor value / enable remote sensor connections. In current scratch, you need to disable this first, then enable. In nuScratch or in windows, just enable. I repeated these things on windows, where I used putty in raw mode for the telnet part.

Be careful in typing in characters into the telnet session. Scratch will try to interpret these for the protocol. After some characters, you receive an squeak error popup. There is no recovery, you need to restart scratch then. Think there is no robust error recovery strategy for the receiver part of the protocol, but this is not the topic here.

Make a global variable ‘for all sprites’, named ‘a’. The name does not matter, but ‘a’ is simple and short for now.
Run the following script:

The result is
sensor-update “a” 2
Which is not very good. The intermediate separate set-values are ignored. When repeating the execution, there are no more sensor-updates sent out.

Some change-by-blocks in a sequence do behave even different. The last value is propagated.
This is done to find out if the ‘change by’ block has special handling.

Last one, embrace “each set a to something” in a while(1)-loop

My original assumption was, that there is a ‘previous-value’ for each variable, and when a change is detected, then the value is propagated. Current implementations do not work this way.

Current behavior is difficult to explain for kids working with scratch.

Since some weeks, a new beta scratch version for RPi is around, announced on raspberrypi.org.

The work done by Tim Rowledge is in the area of performance. First impression is ‘it is faster’ in editing and runtime. So it is time to measure some performance numbers.

I measured timings for three systems:

Update: jamesh asked to repeat the tests with ‘HW cursor implementation for X’ xf86-video-fbturbo – video driver. Sounds complicated, but installation was straightforward. The tests executed with this modified X-system are marked with ‘X’

In loops and calculations, the new scratch version on RPi even outperforms my windows-machine running legacy-1.4-scratch from mit.edu. On Pi, it needs only 50% execution time compared to current pi-scratch. This is impressive good.
For the other tests, execution time is down to some 85%, 80%.

One exceptional improvement is in these cases where variables are displayed on stage. This slows down current scratch, but in beta and with the modified X it executes 1o times faster (move2_presentation).

Especially for the graphic operations, improvements are noticeable. 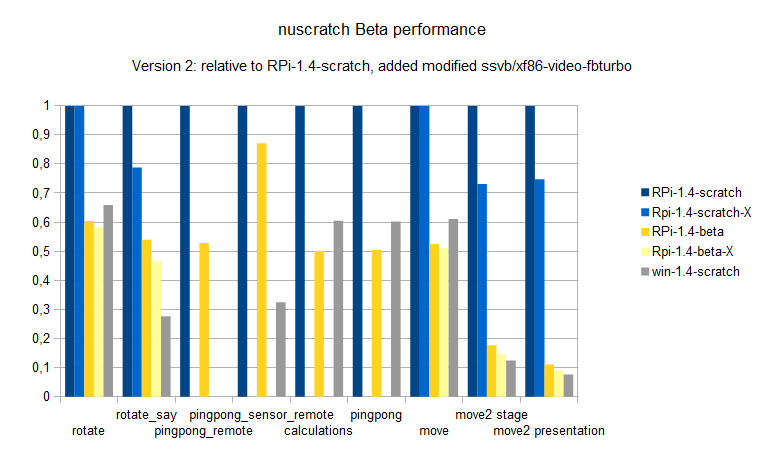 The results are blue, dark yellow for raspbian system, and light blue, light yellow for the modified driver.

The modified driver in X results in better performance, execution times are 0.8 times only in most cases. The quite simple rotate and move-examples do not benefit too much, but whenever it gets crowded on stage it is noticeable.

For scratch remote sensor connections, the improvements are not so impressive and I assume it is based on overall performance optimizations. But the tests show that remote connections for broadcasts or variables need 40 ms for sending or receiving. Which is not bad. The great improvement in pingpong_remote is due to the comparison of presentation mode operations. Here, the RPi-1.4-scratch is much slower in presentation mode. Compared with full-stage mode, this is in the 80% range of other results.

The scratch projects are in performance.zip.
For the scratchClient, see download page.

Rotating sprites needs quite a lot of computation power. It needs rotating the sprite by an angle and redisplay the graphics. In order to avoid possible caching of calculated sprite graphics, I have choosen to apply extra ‘one degree’ rotations in between.

Displaying the ‘say’-bubble is a challenge. The system needs to look for the solid icon inside the alpha background, and adjust the bubble accordingly.

The move sample I usually explain to the kids in school as a scratch-antipattern: while true; goto x,y; inc x; inc y; endwhile; This works, but movement speed is limited by cpu-usage. The second is movement of two sprites with variable display on stage. This slows down execution speed drastically in RPi-1.4-scratch. In this area, the beta is a class better. 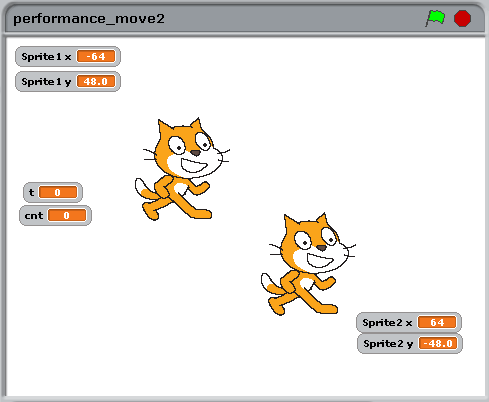 The presentation mode timings are

There are many assumptions on remote access for scratch timings. So I took the opportunity to measure some values.

It is not possible to measure time from a broadcast in scratch till it arrives in a remote system. It would need software ‘instrumentation’ inside scratch. But it is possible to send out a broadcast, and wait for a response coming back, using a remote scratchClient.

For the test, scratch script sends broadcast “ping”, and my scratchClient-software responding with “pong”. In scratch, this is repeated 200 times and time recorded.

The legacy scratch in fullscreen needs much longer than in edit mode, although the script animations cost some time. Strange.
The new scratch is 10 percent faster.

What does this mean on IO-Performance ? One event out, one in in 16sec/200 = 80ms or one way in 40ms. This is much faster than reported elsewhere. Not to forget: nothing else running around, no animations or alike.

When you want to run this test on your machine, load my scratchClient software, and use command line

Similiar setup as in the broadcast example, but there are variable values send over the network.

When scratchClient receives the ‘a’-value, it increments it by ‘1 and sends it back.

These values are very close to the broadcast-timings.

The scratchClient is same as for the broadcast test.

Simply a loop, and a few calculations.

Sending broadcasts inside scratch. Remote sensor connections are disabled, and code is executed in presentation mode to avoid the script animations during executions.