There was a question on how to edit scratchClient config files. There was the need to add a Button to a GPIO. Button inputs are handled by a GPIOEventInput-Adapter.

Where to find the files

Configuration files for scratch usually are in directory /home/pi/scratchClient/config/ . The ‘/’ at the end is used to mark a path as a directory.

Config files are XML-Files, eXtensible Markup Language with the ending ‘.xml’. There are special editors for these files, but as xml is plain text a text editor can be used to edit.
For almost each adapter type there is a sample in these files. We start to edit the marked file config_ikg_button_intern.xml as it already contains a GpioEventInputAdapter which will be modified. Right-click on the file and select ‘open with – Text Editor’.

When the file is open, there are sections visible in brackets. Adapter definitions start with <adapter> and end with the next </adapter>. There can be multiple of these sections in one config files which are activa6ted by scratchClient at a time.

The adapter is light grey marked in the above screenshot. The colors are different between various editors.

Copy this adapter and paste behind an existing adapter, behind the </adapter>-element. The sequence in the file is not important. You will notice that the sequence is used for the display in the adapter view in the browser. But technically all adapters work the same independent from their position in the file.

The config file provides the data for scratchClient hoq the adapter shall work. Some of the information needs to be unique, other information is needed to have meaningful names in scratch.

Save the file in a different location. Choose directory /home/pi/scratchClient/configuser/ which is dedicated for user files.
Files in userfiles are searched first at scratchClient startup. And will never be overwritten on updates.
Give the file a name which is releted to the project, e.g. config_project.xml. The extension ‘.xml is needed.

The command line in scratchClient allows some flexibility to lookup the config files. The -c option allows to omit the extension and the prefix ‘config_’. The lookup procedure first looks in ./userconfig/’, if not found in ‘./config/’. The following command line is performing the same file lookup as above.

The name button_motor is visible. The quite long scratch names are truncated, but this only in the view.

Editing a .xml file can be a challenge. If there are problems, scratchClient will reject to load the file and give error messages in the console.

Did you ever want to control GPIO from scratch2 ? Or other sensors connected to a raspberry pi ?

The last days I worked on connecting scratch2 with GPIO on raspberry and more.
To be precise, this is done by either using scratchx or since june 2017 with the standalone version of scratch2 for raspbian.

This new version of scratchClient is still supporting scratch1.4 and there are no changes in the config files needed.

One of the limitations in scratchX are that sharing projects is not possible.

The extension blocks in scratchX are defined using the definitions from the config xml file from scratchClient. So there is no programming effort needed to build the extension file.

Current implementation allows to send/receive values and events from scratchX to/from scratchClient. This is similiar to the features available in scratch1.4 with the broadcast system.

In legacy 1.4 scratch, there are some predefined blocks for motors and sensor names for scratchBoard. This needed many explanations for unexperienced users to avoid confusion. 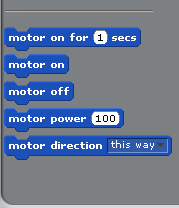 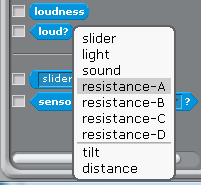 It was also difficult to explain that values from scratchClient are received as sensor values, but values to be sent out need to be defined as variables ‘for all sprites’.

In addition to this, the extra step ‘enable remote sensor connections’ is hidden down in a context menu of a block on lower edge of the window.

Advantages of the scratch2, scratchX block based interfacing

In scratchX, all the capabilities of the external system are exposed as blocks. This avoids all the mentioned problems from legacy scratch 1.4.

scratchClient in its initial design is scratch1.4 centric. The start and stop logic is scratch 1.4 oriented and needed another structure.

During this work, the internal web app was lifted to use tornado framework. Which has build in websocket support and is easier to use as cherrypy. As scratchX is online only, the connection to a local data provider needs to bypass the ‘same server policy’ and this was quite simple to achieve with tornado.
Monitoring and simulation of events is still possible by using the internal web server. Some bugs have been removed in the web pages on this way.

As the experimantal scratchClient is merged into scratchclient, the installation is same as for scratchClient.

Start scratchClient with the configuration xml file for your hardware. I recommend using python3 to run scratchClient. Unicode support is the reason for this.

Load http://scratchx.org/#scratch into the browser. 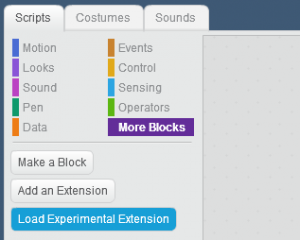 Paste the following url into the form

This url brings the Load Extension Block into the additional block palette. 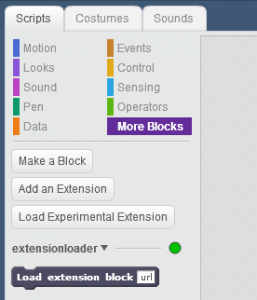 Add a wait block before the ‘broadcast [blueFlag]’ with 5 seconds. This gives the extension the needed time to load and to initialize.

The url to use to load the scratchClient extension is

Copy paste this url into the ‘load extension block’. If scratchClient is running on a different computer, change ‘localhost’ to either the other computer’s IP-address which is something like 192.168.2.203 or perhaps a more meaningful name if the network configuration allows.

See the ‘green’ dots to the right of the extension name. If these turn red, connection is lost. Possibly scratchClient has been stopped, can’t be reached or other problems. In my tests the connection was stable. 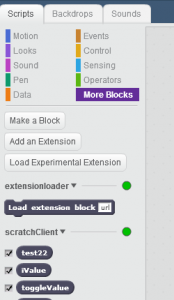 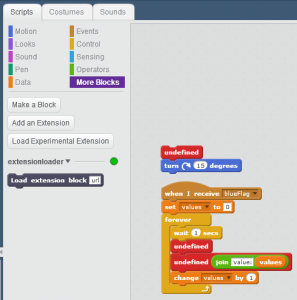 When program is started with green flag and the proposed initial script is executed, the Load Extension Block reads the extension from scratchClient and the program can be used.

In raspbian jessie june-2017, there is a standalone scratch2 version available. 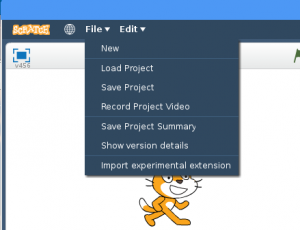 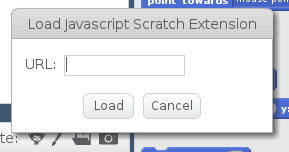 Paste the url into the dialog: http://localhost:8080/scratchx/js/extension.js

Validate in ‘more blocks’. The example here is for a test adapter and looks different for your configuration file. 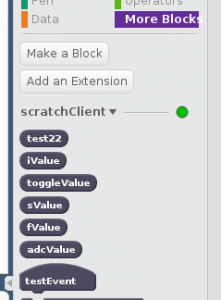 This scratchClient version is released

There are no known limitations for this release.
Just start scratchClient and use either scratch1.4 (enable remote sensor connections) or follow the procedure to set up a scratch2/ scratchX connection.

Some features have been removed. Command line switches to control the gui are removed. As the web app server is needed to connect to scratchX, this does not allow to disable the web browser.

The tests for the scratchX integration have been performed with a new pi2go-configuration. This includes GPIO, PWM, hardware PWM and ADC chips.

The monitoring/simulation web page display the many inputs and outputs available for this robot. 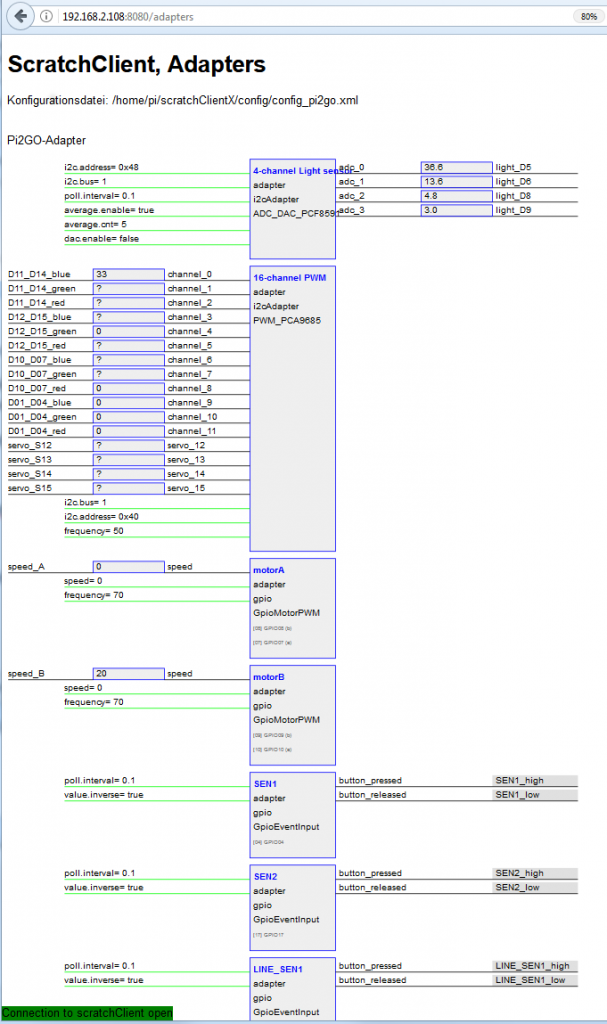 Not all adapters fit on the page.

The blocks build from this config in scratchX are (not all blocks shown). 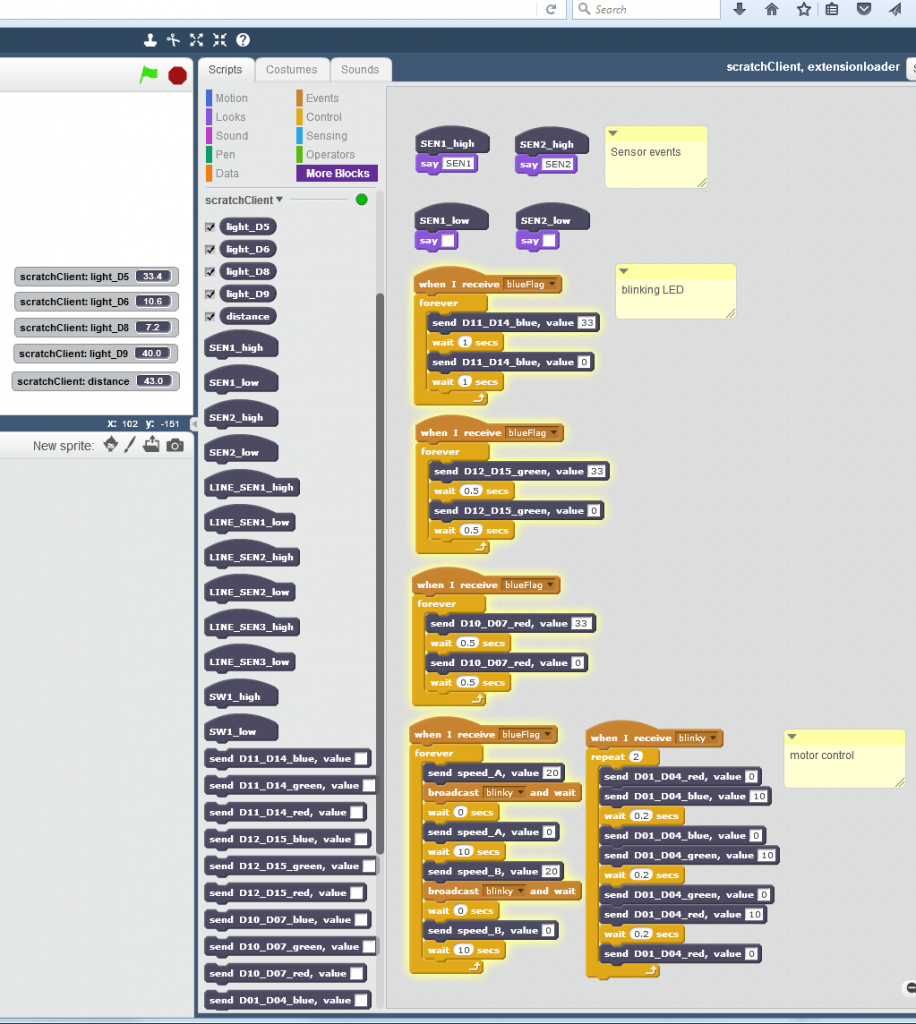 On stage, there are the lights reporters and distance reporter visible.